Child Marriage is weeding out the weak

Haridas Sharda, Ram Mohan Roy, and Savitribai Phule were some of the greatest reformers to fight against Child Marriage. With the great persuasion of Harisdas Sharda, in 1929 “ The Child Marriage Restraint Act”, was exhibited to eradicate the evil of child marriage in India. Even almost a century later, The South Asian nation remains home to a third of the world’s child brides.

Let’s look at the life of child brides in a developing world.

According to a new report in 2017, the majority of women in India were married before they turned 18. Families in the poorest communities marry off their daughters at a very early age to save on wedding expenses and banish the financial burden on them. Child Marriage is a tough issue in India that calls for the immediate need of attention. The engagement of girls among the Scheduled Castes, specifically their marriage was found to be considerably low as compared to that among other social sections

Poverty, lack of education, gender inequality, girl child as a burden, and the safety of girl child are considered to be the major reasons for the prevalence of child marriage. Girl Children in rural areas are more major victims of these social evils than in urban areas.

Some facts about Child Marriage

. According to National Family Health Survey, 40% of 60 million child marriage happens in India.

. According to International Center for Research on Women, India has the 14th highest rate of child marriage in the world.

. The state with the highest rate of child marriage (50% and above) are Bihar, Jharkhand, Uttar Pradesh, and West Bengal.

These facts clearly show that the “Child Marriage Restraint Act” was not able to eradicate this social evil. But with the help of The Prohibition of Child Marriage Act 2006, minor boys and girls who are forced into child marriage have the option to void their marriage up to two years after reaching adulthood.

Child marriage is no less than child trafficking, many parents in rural families marry off their young daughters to adult men out of the greed for money. Recently, in Mirzapur, Uttar Pradesh, a 38 years old man paid one lakh rupees to the bride's family. Meanwhile, the bride was just 13 years old. This makes it the case of child marriage as well as child trafficking too. This is one of the many cases that got reported. 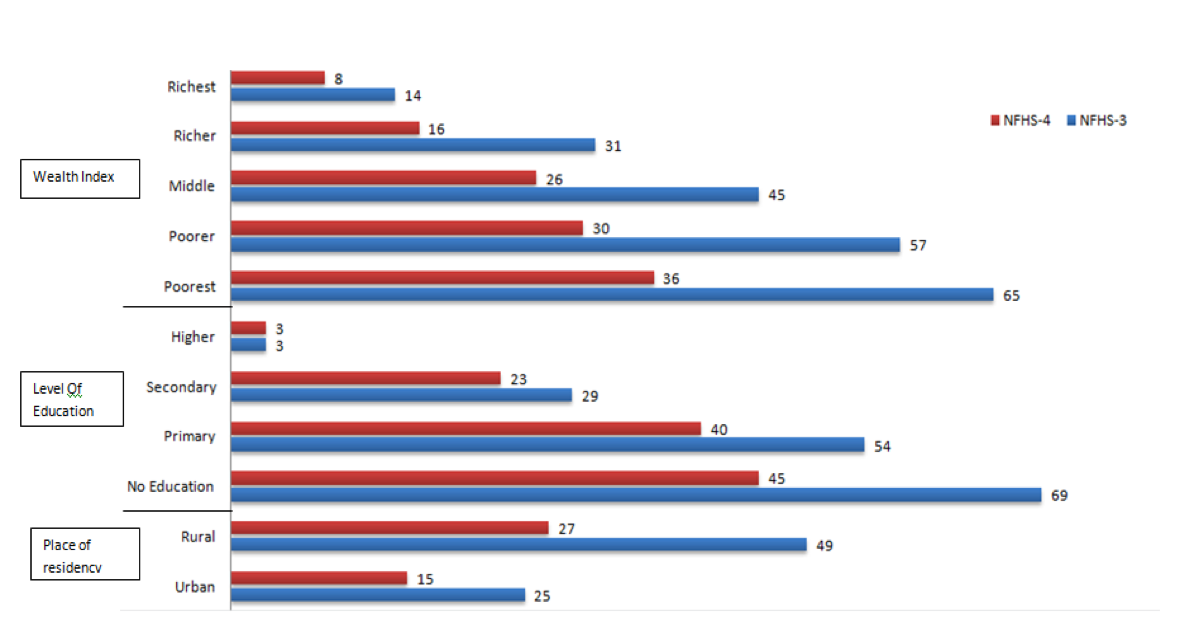 source: Sanjay Kumar,2019 Key characteristics of women aged 18-23 who were married before 18 years of age.

When Covid occurred the country was in the strictest lockdown. While the government was focusing on the health management of the country. This social evil prevailed highly in the society. Reports of Child Marriage and Sexual abuse have risen up to 52% in some states as the breadwinners have lost their jobs and children-mostly girls-have been dropped out of school.

119 child marriages alone had been reported in the district of Cooch Behar, out of these 97 marriages were stopped and 7 FIRs had been lodged. While in Telangana, authorities have intervened in over 1,355 child marriages between 2020-2021.

The data from Childline, a nodal government agency for children, reported almost 5,584 distress calls related to child marriages. These are just the tip of the iceberg, they clearly suggest the disturbing trend of child marriages during the lockdown. This data represents a 33% increase in the cases of child marriages from 2019 to 2020.

The lockdown and the closure of the school, become a life threat for the girl child. As they are out of the protective net of school - fear for their physical safety and sexual purity starts prevailing in the families. And for family honor, rural families marry off their young daughters to adult males. The restrictions during the pandemic on the number of guests to be invited made child marriage a cost-saving measure too.

In 2019, the government increases the legal age of marriage from 18 years to 21 years, to promote the education of girl children to eradicate the social evil of child marriage.

Even after an increase in the legal age of marriage, child marriage is still a serious issue in India, especially since 41 percent of females under the age of 21 live in poverty. While child marriage is a violation of human rights, families see it as a means for their daughters to escape their family’s roofs and acquire education and independence or even give their daughters economic stability than they might get being married off to a poor man.

India aims to achieve its Sustainable Goal Development of eradicating child marriage by 2030. But the reflections on the facts shown during the pandemic show the widening gap between the rich and poor, girl and boy, and compromising the right of Education from Education. The Indian Government has to make more strict policies to annihilate child marriages.

You have successfully subscribed to our newsletter.